Saturday afternoon saw another pitiful performance from Watford at Vicarage Road, a 0-0 draw with Sheffield United leaving the Hornets rock bottom of the Premier League with only three points.

It was a dismal first-half display from the home side, having only 31% possession and failing to register a single shot on target​. Andre Gray was guilty of a glaring miss, and Chris Wilder's side were unlucky not to be ahead at the break.

Watford started the second half on the front foot, their first shot on target came from Danny Welbeck, who was unable to capitalise after a great run which should've seen the Hornets 1-0 up. However, that spark was soon extinguished as the home side were able to manage just one more shot on target in the rest of the game.

Second half substitute Craig Dawson had the best chance of the game, but failed to beat Dean Henderson with a headed effort. Aside from that, there were very few notable chances for either team.

​Sheffield United will be kicking themselves after failing to take advantage of a poor Watford display and leapfrog Manchester United into 11th place.

​Watford fans will be hoping that the saying 'form is temporary and class is permanent' is a literal one after the Hornets' dreadful form continues. Quique Sánchez Flores' side look devoid of ideas, attacking penetration and ball retention.

HT: Watford 0-0 Sheffield United. Andre Gray missed an early sitter for the hosts but #sufc should really be leading, given their dominance of possession and the hosts' shattered confidence. #twitterblades

Watford with 37% possession at home to Sheffield United...

Watford need to be relegated, awful side

The home side were only able to fashion two shots on target in the entire match. Gray skied a sitter in the first half and Welbeck failed to beat United loanee Henderson early on in the second half.

With only one point in the Premier League since August, Watford fans will be hoping for a drastic change of form, but face a tough away game against ​Tottenham Hotspur to come next.

In all honesty it was extremely arduous to choose a star player for Watford. Andre Gray, Danny Welbeck and Craig Dawson the only players to contribute anything noteworthy in the game for the home side.

Watford could have easily beaten Sheffield United if Andre Gray has scored from 2 yards.

Strikers should be fined if they miss sitters.

Roberto Pereyra was the only play who looked capable of carrying his team forward. In the opening 15 minutes the midfielder did well to pick out his teammates, but went quiet after the second half began. The fact that the Argentine was Watford's star player speaks volumes.

​The Blades will be frustrated not to have come away from this game with all three points. Not because they played exceptionally, but purely because of how dire their opponents were on the day. Sheffield United only amassed three shots on target in the game. 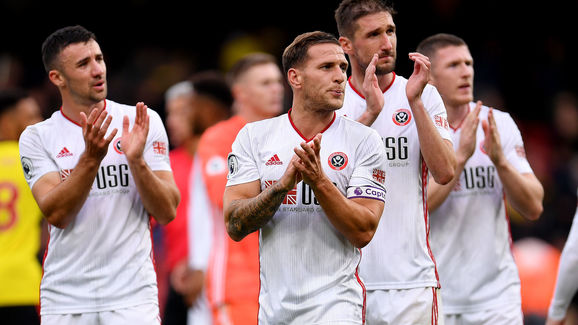 On the plus side, Sheffield United managed to contain Watford and only allowed two shots on target in the entire game.

Thanks for your amazing support today Blades fans  pic.twitter.com/x9IaPexNEU

However, overall the traveling away fans will be disappointed that their team did not make the most of a poor Watford performance.

Another tough choice. John Fleck had a solid game, creating chances and tracking back to do the dirty work, however the star player title has to go to Dean Henderson for his incredible save to deny Craig Dawson in the dying minutes.

Motm what a way to bounce back

The 22-year-old Manchester United loanee will be happy with his performance after a day to forget at Liverpool last week.

Watford travel to the Tottenham Hotspur stadium in their next league outing before hosting ​Bournemouth at Vicarage Road.

Meanwhile the Blades host ​Arsenal after the international break, before a tough away test at ​West Ham in gameweek 10.