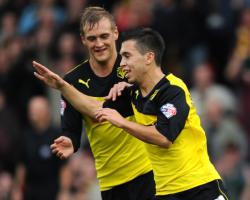 football.co.uk/match_reports/watford_reading_3632026-9.shtml">Watford 0-1 Reading: Match Report - view commentary, squad, and statistics of the game as it happened.

Reading's six-game search for a win is over after an early Kaspars Gorkss header was enough to end Giuseppe Sannino's unbeaten start as Watford's head coach with a 1-0 SKy Bet Championship win.


The fifth-minute winner was to be the Royals' only attempt on target, although their opponents will be wondering how they did not get at least a point out of the contest as they had enough good chances in the second half.


The Royals had come into the game without a win in five matches in all competitions but they made a promising start to the contest and it was rewarded with a goal in the fifth minute.


After seeing his shot from the edge of the penalty area deflected behind, Jordan Obita took an inswinging corner from the right and Gorkss attacked the near post to flick a header past the helpless Manuel Almunia.


Nigel Adkins' men were not too far away from doubling their advantage when Jobi McAnuff latched on to a loose pass from Alexander Merkel, who was making his Watford debut after signing on loan from Udinese, and accelerated inside off the left flank before dragging a shot narrowly wide.


Alex McCarthy had to be watchful to deal with a Merkel shot from the edge of the penalty area at the other end before the visitors had another chance when Pavel Pogrebnyak headed a McAnuff free-kick over the top.


Watford, though, began to offer more of an attacking threat as the first half wore on and got into some good positions, only for the final ball or touch to let them down.


Lewis McGugan's deliveries caused the Reading defence problems on several occasions but arguably the closest the Hornets came to equalising before the break was when a fine Diego Fabbrini pass found Daniel Pudil on the left side of the penalty area and he pulled the ball across the goal but Sean Murray was able to connect with an outstretched leg.


Watford could have been back on terms six minutes after the restart when Hector Bellerin's precise delivery picked out an unmarked Troy Deeney but he was unable to beat McCarthy with a header.


Adam Le Fondre shot wide for the visitors but Sannino's decision to bring on Fernando Forestieri for Bellerin and change to a 4-3-3 formation led to a spate of chances for the Hornets.


First McCarthy pushed a shot on the turn over from Deeney after the hosts had got round the back of the defence, then Forestieri fired badly over from barely six yards out after being picked out unmarked by Deeney's pass.


Watford continued to push with Gabriele Angella the next to go close, hitting the side netting after being set up by Lloyd Doyley and then McCarthy saved an angled McGugan drive with his legs.


To add to the Hornets' woes, Merkel was to spoil his debut when he received a red card in injury time for a reckless challenge on Nick Blackman.