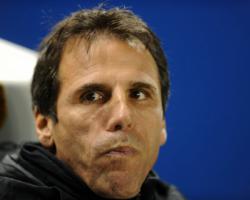 Deeney sinks Blues againBirmingham fan Troy Deeney scored the winner at St Andrew's on the opening day of the season and repeated the trick on Tuesday night as Watford continued their upturn in fortunes with a second 1-0 victory over the Blues this term.The Hornets were much less impressive than on Saturday, when they led 2-0 at leaders Leicester before being pegged back by a stoppage-time equaliser, but they got the job done thanks to Deeney's 33rd-minute strike, scoring at the second attempt after being set up by Fernando Forestieri.The Blues almost took the lead in fortuitous circumstances in the seventh minute when a mis-hit Chris Burke cross from the right almost crept under the crossbar, but a combination of the back-tracking Manuel Almunia and the woodwork diverted it over the top.Within two minutes, though, the Hornets had what looked a clear penalty appeal turned down when Federico Macheda's outstretched arm clearly connected with a Daniel Tozser corner but referee Mark Haywood was unmoved.But the home side needed the woodwork to come to their rescue again soon after when right-back Paul Caddis advanced into clear space before hitting a superb 30-yard shot that crashed off Almunia's right post with the goalkeeper beaten.That opportunity came after Alexander Merkel had struck a half-volley from the edge of the penalty area narrowly wide at the other end.But an off-target Gabriele Angella header from a corner apart, the quality of the game deteriorated until the home side took the lead in the 33rd minute.Forestieri did well to pull the ball back from the left side of the penalty area, and Deeney swung and missed at his first attempt but was afforded enough time by the Blues' defence to recover and strike the ball past Darren Randolph with the aid of a deflection.Birmingham made a livelier start to the second half but they were limited to long-range strikes from Macheda and Brian Howard, which Almunia comfortably dealt with, while at the other end Forestieri shot straight at Randolph.The game continued to be scrappy in the main, although Caddis tested Almunia with another low strike from distance before Davide Faraoni met an inswinging Tozser free-kick but could not direct his header on target.Blues boss Lee Clark made a double attacking change with 15 minutes left as his side sought to get back on terms, bringing on Peter Lovenkrands and Lee Novak

But the visitors were almost two down soon after when a Forestieri header was cleared off the line following a Tozser corner.Clark's men very nearly did snatch a point deep into injury time when Randolph came upfield to pump a free-kick deep into the heart of the Hornets area, but Aaron Martin headed narrowly wide