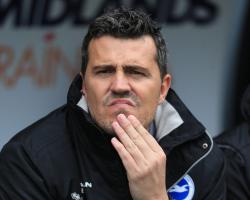 Watford 1-1 Bournemouth: Match Report - view commentary, squad, and statistics of the game as it happened.Cathcart rescues point for HornetsCraig Cathcart was Watford's unlikely saviour with a late equaliser to salvage a 1-1 draw against Bournemouth.The defender, on as a substitute for his first appearance of the season - and his first since rejoining the club in the summer - lashed in a superb volley to cancel out Harry Arter's spectacular opener.Cathcart's fifth goal in six years provided a tonic for Watford boss Oscar Garcia, who was not at the game having spent the past six nights in hospital after complaining of chest pains

The 41-year-old Spaniard did write his programme notes, however, and revealed he hoped to be back at work "very soon".In Garcia's absence, assistant coaches Ruben Martinez and Javier Pereira took charge and saw their side almost get off to the worse possible start.Callum Wilson gave Gabriel Tamas the slip on the corner of the penalty area and was then clumsily brought down by the Hornets defender as he raced towards goal.But veteran full-back Ian Harte, normally so deadly from 12 yards, made a horrible mess of his spot-kick and rolled it wide of Heurelho Gomes' left-hand post.With Watford skipper Troy Deeney missing out through injury, the hosts' attack was led by Matej Vydra and the Czech striker was close to giving them the lead when he slid in to meet Lloyd Dyer's cross but could not get the vital touch.Vydra had another chance moments later when Daniel Tozser found him with a ball over the top but his effort on the turn was kept out by the Cherries' new on-loan keeper Artur Boruc.But Bournemouth finished the first half on top and should have gone ahead in stoppage time when Simon Francis' cross was met at the far post by the unmarked Wilson, but his header was too close to Gomes who tipped the ball over the crossbar.The visitors did have the ball in the net moments after the restart when Gomes pushed Andrew Surman's shot into the path of Wilson, but he was offside when he tucked the rebound into an empty net.However, Bournemouth finally broke the deadlock in the 63rd minute when Matt Ritchie's crossfield pass found Arter some 25 yards out.There appeared to be little on for the midfielder but he took aim with his left foot and crashed a stunning shot past the diving Gomes and into the corner of the net.But Watford battled back for a point seven minutes from time when Bournemouth failed to clear Juan Carlos Paredes' cross and Cathcart volleyed sweetly past Boruc