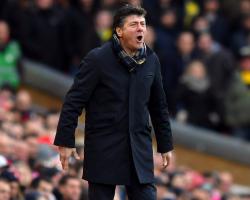 Another defeat for Leicester as Watford strike quickly

Jamie Vardy was felled for a penalty converted by Riyad Mahrez two minutes later, but the Foxes never really looked like finding an equaliser as Watford responded from the 6-1 loss at Liverpool.

Leicester still have more points than Chelsea, their predecessors as champions, did at the same stage last season

The Blues had 11 after 12 games, but are too close to the drop zone for Claudio Ranieri's liking.

Striker Islam Slimani was absent with a minor groin problem, but may be available for Tuesday's clash with Club Brugge, when Leicester bid to reach the Champions League knockout stages.

They will have to play a lot better than they did here.

The Foxes resumed following the international break in 14th place, but their travelling supporters - almost all of them resplendent in matching blue and white woolly hats - were keen to remind their hosts of their status.

They sang: 'Champions of England, you'll never sing that'

But almost as soon as the chorus had begun, Leicester were behind.

Pereyra crossed from the left, Troy Deeney flicked the ball on and the on-rushing Capoue stretched out his right boot to meet it on a half-volley and score.

Leicester's defence, impermeable last season, had holes throughout and Ron-Robert Zieler in goal does not have the same presence as the injured Kasper Schmeichel.

There were chances for Watford before Pereyra cut in from the left and fired an inswinging right-foot shot into the far corner.

Deeney, a summer transfer target for the Foxes, was not satisfied, demanding more from his team-mates

He told Amrabat to press when the winger stood off.

The Foxes pulled a goal back when Miguel Britos was over eager in covering to meet Jamie Vardy.

Mahrez drilled the resulting penalty into the centre of goal.

Leicester's best opportunities came from set-pieces, but the connection was lacking and Watford had the better chances to restore their two-goal lead.

Younes Kaboul beat Wes Morgan in the air at a corner, but headed just wide.

And then Deeney centred for Amrabat, but the Moroccan was half a yard behind the ball.

Vardy was late in trying to intercept a back-pass and clattered into Heurelho Gomes, who resumed after treatment.

The Dutchman crossed for Pereyra, whose header was straight at Zieler as he moved across goal.

Morgan had an effort blocked by Kaboul, which was followed by forlorn cries of 'handball' from the visiting support, and Robert Huth's deflected effort was then gathered gratefully by Gomes.

Janmaat and next Amrabat fired well off target for Watford before Jeffrey Schlupp's pace fashioned a chance for fellow substitute Ahmed Musa.

He failed to control a regulation pass

It summed up Leicester's afternoon.