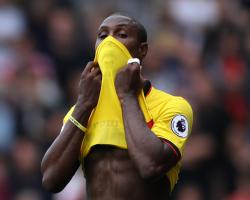 Stefano Okaka scored his first goals for Watford as Everton's miserable run continued with a 3-2 defeat at Vicarage Road.

The Italian striker, a bit-part player since joining from Anderlecht in the summer, conjured up a cheeky back-heel to cancel out Romelu Lukaku's opener for the visitors.

Sebastian Prodl then headed Watford ahead and Okaka, whose previous Premier League goals came during a loan spell with Fulham six years ago, made it three before Lukaku pulled a late one back.

After their bright start to the season, Ronald Koeman's Everton have now won just once in 11 and saw their opponents, who had lost their last two, climb above them in the table.

Yet it all appeared to be going to plan for Koeman when, having weathered some early Watford pressure, they took the lead with little fuss in the 17th minute.

Gareth Barry floated the ball over Miguel Britos to the lurking Lukaku, who expertly brought the ball down before tucking it past Heurelho Gomes for his eighth goal of the season, and his first in five matches.

The Belgium striker dedicated the strike to Yannick Bolasie, holding his fingers up to signify his stricken team-mate's shirt number 14 after the winger was ruled out for the campaign through injury.

Not for the first time, Amrabat had the measure of Ramiro Funes Mori before whipping in a low cross which Okaka, having escaped the attention of Ashley Williams, met with a stylish back-heel at the near post.

Troy Deeney, stuck on 99 goals for Watford for the last two and a half months, had a chance to raise his bat before the break when Adlene Guedioura stood a cross up to the back post

But, with the landmark perhaps weighing on his mind, the Hornets skipper skewed an unconvincing volley wide.

Nevertheless, Watford took the lead on the hour when, moments after he had planted a header over, Prodl nodded in a free-kick from Jose Holebas.

With Everton wobbling at the back, Watford were denied a third when Maarten Stekelenburg produced a stunning save to keep out a Britos header.

But from the corner Okaka nodded in Holebas' cross at the near post, with Leighton Baines unable to keep the ball out.

Deeney followed up in the hope that he had finally reached three figures, but replays showed Okaka's header had crossed the line.

Lukaku pulled one back with a header from Aaron Lennon's cross with five minutes remaining, but, despite a late rally, there was no way back for Everton.