​Watford have lost their appeal against the red card handed to Troy Deeney during the club's 1-0 home defeat to Arsenal in the Premier League.

Deeney caught Lucas Torreira with what was deemed a deliberate elbow in the 11th minute of the match to reduce his side to ten men, despite strongly 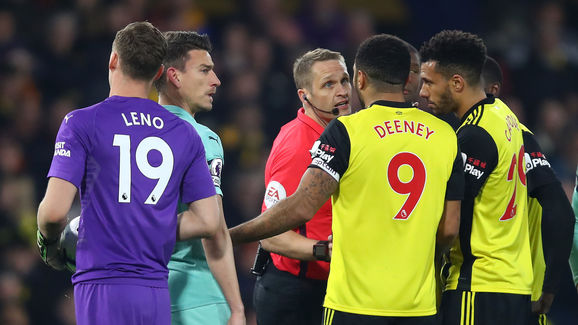 Watford manager Javi Gracia has now revealed the Hornets have lost their appeal, meaning ​Deeney will miss the next ​Premier League trip to face

BREAKING: Javi Gracia says @WatfordFC have lost an appeal against Troy Deeney's red card in their defeat to @Arsenal. #SSN

Deeney was sent for an early shower shortly after as Unai Emery's men held on the record a narrow 1-0 win that saw them move back into the Premier League top four. For Watford, they will still retain hopes of a seventh place finish in the league, currently sitting level point behind Leicester, who occupy seventh, with a game in hand on Brendan Rodgers' side.

Anyone else still wondering how we didn't win that? 

Javi has nothing but praise for the lads 

Regardless of their league finish, Gracia's men could claim a European place next season should they overcome Manchester City in the FA Cup final next month, after seeing off Wolves in the semi finals.